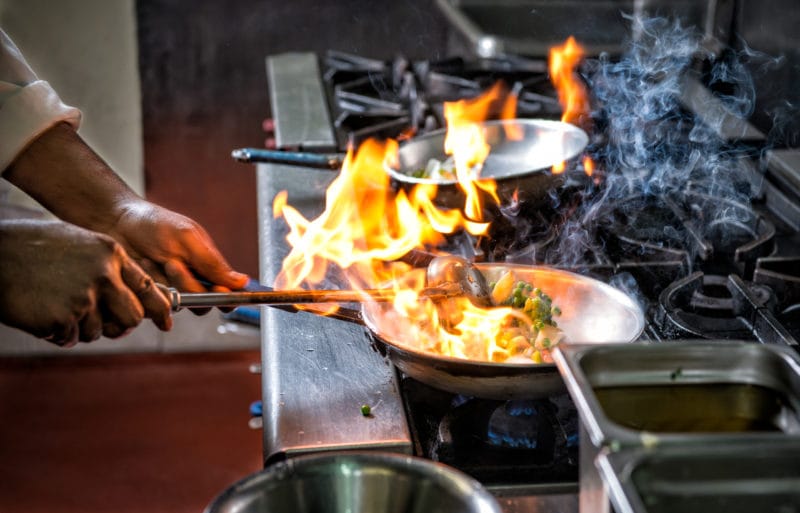 How to Prevent and Put Out a Grease Fire

It may sound slightly counterintuitive, but grease fires can be even more dangerous than a regular fire. Why? First, the traditional methods used to extinguish them can be counterproductive. Second, because grease is a liquid, it means that fire can spread much more easily. The best way to avoid grease fires is never to have to deal with them. This article will look at how to prevent grease fires and how to put them out. Read on to find out more.

What is a Grease Fire?

If you’ve ever heard about the fire triangle, you’ll already know that fire needs three things to flourish:

When it comes to grease fires, the third point on that list is particularly relevant. A grease fire is any fire that uses a form of oil for its fuel. This ‘oil’ can take many forms. It could be motor oil or machinery grease, the most common type is caused by cooking oil.

And it is a serious threat.

The NFPA estimates that of all fires started in the home in 2020, 49% were caused by cooking-related incidents. That’s very nearly half!

Why are Grease Fires so Dangerous?

All fires are inherently dangerous.

However, grease fires even more so, as the usual means used to extinguish them can cause further danger.

Ever heard the saying ‘oil and water don’t mix’. It’s actually true and even more relevant when considering grease fires. Here’s why.

The causes of grease fires are usually a result of the grease becoming too hot. This is particularly true in the sense of cooking equipment, such as pans and fryers. Often people’s first instinct on seeing a fire is to cover it with water.

This would be a very bad idea.

When hot grease is exposed to water, it plumes and spits. Often this can create a fireball and spew hot grease elsewhere, spreading the fire.

To deal with a grease fire takes a little specialized knowledge of how to deal with fires. Let’s look at how this is achieved.

How to Prevent Grease Fires?

The first and safest step is to prevent a grease fire from happening in the first place. Fortunately, with some common sense and care, it isn’t difficult. Here is some great guidance to preventing grease fires:

How to Put Out Grease Fires?

As we said above, there is a different technique to combating grease fires. Looking at the fire triangle above, it will be a little challenging to remove the fuel from the fire. And we can’t reduce the heat by using water. So what’s the answer?

Here is how to put out a grease fire:

Grease fires require greater knowledge to deal with. With the above guide, you increase your chances of successfully controlling a grease fire. However, there is no substitute for professional advice, equipment, and guidance. Fraker Fire can offer extensive knowledge in fire protection.