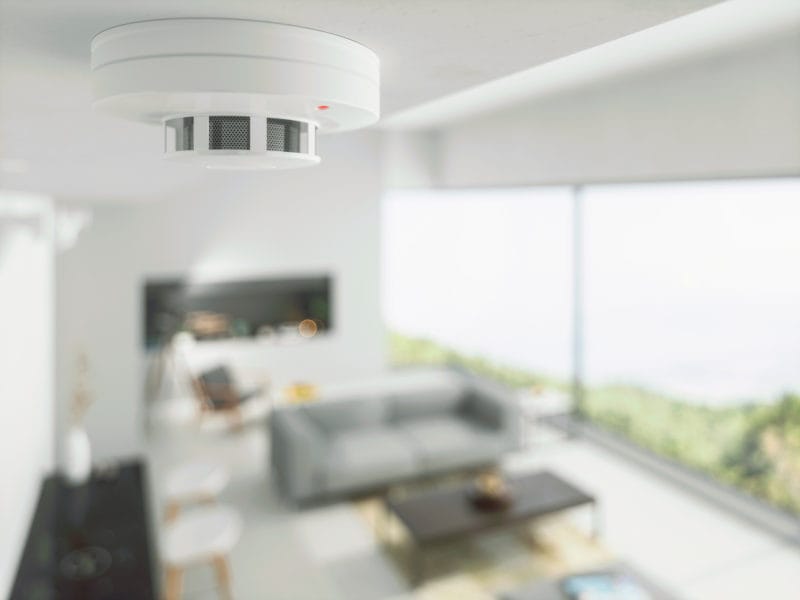 Smoke Detector Beeping? Common Reasons And What To Do Next

There’s nothing more annoying than your smoke detector beeping when there’s no smoke. The sound starts to grate right away, and your first thought is to just take it off the wall and pull the batteries. As tempted as you are though, don’t do it. If it’s beeping, that’s a sign that you need to pay attention to it.

Here’s why your smoke detector is beeping, and what you should do about it.

Before you assume that there’s something wrong with your smoke detector, you need to ensure that there isn’t a fire in your home. As Guardian Protection points out, there could be a fire beginning somewhere that you can’t see. Check everywhere first, to ensure that you don’t actually have a fire on your hands.

Also, be aware of the smoke alarm type that you have. Do you have a battery operated one, or a hard wired one? Hard wired models usually have battery backups, so be aware of that. Also, do you have a newer ‘smart’ smoke alarm? These alarms may not beep at the detector, but instead at a control panel. They may even send you alerts to your phone. If you have an alert, you’ll need to verify or cancel in a couple of minutes, before the fire department is alerted.

The Batteries Are Dying

Is the smoke detector chirping at you? Then that’s a sign that you need to change the batteries. Even if you have a smoke alarm that’s hard wired into the house, it still needs batteries as a backup. If there’s a power cut, then it can still alert you if there’s a fire.

If you’re hearing it beep, it’s time to change the batteries out. Replace the batteries and check to see if that stops the beeping. In most cases, this will be enough to stop it and you’ll be confident that you’re protected again.

To stop this from happening in the future, it’s good practice to swap the batteries out twice a year when you test it. Many like to use daylight savings to remember to do this. Every spring and winter, take the time to test the detector and swap the batteries out. That way, you’ll never have to deal with that beeping again.

In some cases, the smoke detector may be damaged. It’s easy to do, as water, paint, fire, and grease can all interfere with the way they work. If you believe yours is damaged, you can call your fire protection service to come and check yours. And if they believe it is damaged, they will replace it for you. If you don’t use a service like this, you can easily pick up a new detector from the hardware store.

Moisture and Heat Are Damaging the Detector

Of course, your smoke detector is designed to detect the presence of smoke. However, they can also react to extreme heat and moisture. When they pick this up, they may start beeping again. Pay attention to when it beeps. Does it go off when you have a shower, or when you do laundry? Then that’s a sign that moisture is getting into the detector, setting it off. If this is the case, you’ll want to move the detector somewhere else so it doesn’t get interfering signals.

Dust is Blocking the Sensors

You’ll often find that your smoke detector is going off simply because it has become dusty. They are like any other installation in your home, in that dust builds up on them over time. This can give it the signal that there’s a fire happening, and start s the beeping.

To stop this from happening, simply clean the detector off with a dry rag regularly. Once a year, take it apart and clean out the inside properly. When you do this, never use liquid cleaning products as they can cause damage.

Cooking is Setting the Alarm Off

This is a very common reason why your smoke detector is beeping. You don’t even need to burn food for a good alarm to go off, as they’ll detect the heat from a big meal or a lot of cooking. While it’s good to know it will alert you in the event of a fire, it’s annoying for it to be going off when you’re just trying to cook.

There are several ways you can stop this from happening. While you’re cooking, you can place a fan near the detector to stop smoke and heat from setting it off. You can also buy smoke detector covers that block the signal while you’re preparing food. Opening a window may also be enough, too.

If you do use preventative measures, like a smoke alarm cover, make sure you remove them once you’re done cooking.

The Smoke Detector is Expired

All smoke detectors have an expiration date. If it’s started to beep when there’s no fire, that’s a sign that it’s reached the end of its life span. Check the back of it, as usually, they will have an expiration date on them. If yours is out of date, then you’ll need to replace it. If you’re not sure, you can reach out to a fire protection service to help you out.

The Detector is in the Wrong Place

The beeping can simply be because the detector is mounted in the wrong place. Have you put yours somewhere it shouldn’t be? You shouldn’t place them above stoves, next to windows, anywhere it could be knocked or moved, in cupboards, or anywhere air flow could be obstructed. If it is in any of these places, that’s a sign of why it’s beeping. Try moving it, and see if that stops the noise.

These are just a few reasons why your smoke alarm is beeping. If you’re still not sure, then talk to a local fire protection service and see what they can do to help you. Take good care of your smoke alarms, and you’ll be protected in the event of a fire.